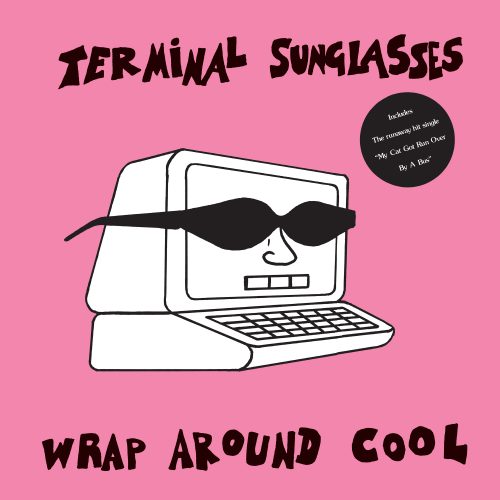 The psychedelic garage band Terminal Sunglasses were part of the Montreal punk and new wave scene from 1983 to 1985. Labelled an “avant-garage” band, they updated 60s influences with the Velvet Underground’s sound, and filtered it all through 1980s punk sensibilities and a wonderful sense of humour. In 1985, they released their only LP, Wrap Around Cool, on the amazing OG Music label. The record immediately shot to the top of the college and community radio charts, remaining at the #1 position for many weeks.

Fronted by Chris Burns (hefty howling, crazy rhythms, dinky leads), with twisted lead and spastic rhythm guitars by Lawrence Joseph, electric bass and harmonica by Foster Grant, and search and destroy drums by george a, the Sunglasses easily take the throne for the weirdest band to ever come out of Quebec. Their songs ranged from the wonderful pop number “Could That be People Crossing My Lawn,” to the over-the-top noise improvisation of “Eating Barbie’s Feet,” to their great cover of the Count Five 1965 garage rock classic “Psychotic Reaction,” not to mention the favourite of animal lovers everywhere, “My Cat Got Run Over by a Bus” (previously included on the ultra-rare OG 7″ compilation, It Came from Montreal).

The band also produced two videos, one for the catchy “Antenna Dilemna” which was immediately banned from MuchMusic, and a second for “Psycho Rail,” which features a cameo by Leonard Cohen, one of the band’s biggest fans.

Never satisfied with the sound quality on the original pressing, the band worked with Artoffact Records on a monumental restoration project that included combining several different source tapes and no less than three different mastering studios in Canada. The results are spectacular!

The newly remastered Wrap Around Cool is now reissued on both vinyl and CD with a beautifully written liner-note essay by Bobby Beaton of The Gruesomes, whose first performance was as opening act to the Terminal Sunglasses. Both formats offer previously unreleased photos and gig poster scans. A limited collector’s edition on pink vinyl is available in a pressing of 200 copies.

“Streaking with heart-palpitating speed but never thrashing, the
Sunglasses’ sound shimmers from one note to another like a pearl sinking slowly in a bottle of Prell.”
-Andrea Enthal, Spin Magazine, June 1986

“The Sunglasses mix it up, from early Velvet Underground style sludge
(their biggest influence, judging from the guitars on this platter) to
Jefferson Airplane freakout guitar, in ska-style uptempo shuffles to REM type drones. Its all cheap, stupid, immature fun, and like the title
says, cool.”
-Howard Druckman, Nerve Magazine, 1985