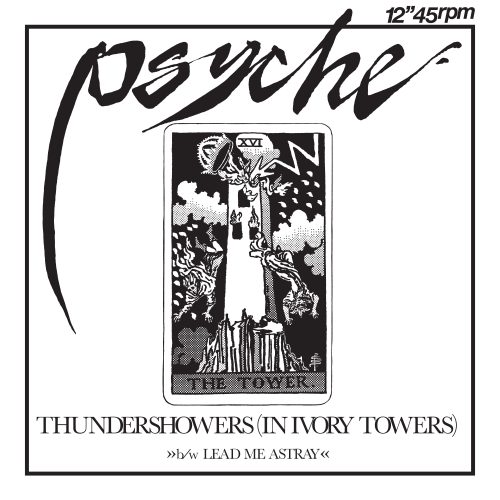 The original independent 12″ that helped launch Psyche’s career in Canada is back, presented in a replica sleeve and with full audio remastering. Thundershowers (In Ivory Towers) includes two mixes of the title track, as well as two remixes of the wonderful b-side Lead Me Astray. Both tracks exemplify the aggressive vocal-driven brand of synthpop that would make Psyche famous. Neither track was ever released on any proper Psyche studio album, making this a delight for collectors and synthpop fans alike.

The reissue also includes some cool replicas of vintage artifacts: an insert contains a replica of the poster for the Thundershowers release show at Toronto’s Nuts and Bolts club. Take yourself back to 1985 when these lined the streets of Yonge and Dundas! A special invitation card replica is also included, which happily enough doubles as an MP3 download code. The original invitation was actually the very first appearance of Psyche’s now-famous logo!

This wonderful reissue is thus not only the starting point of Psyche’s long lasting career creating international synthpop club hits; it is also a snapshot of the history of Toronto’s fantastic nightclub scene.