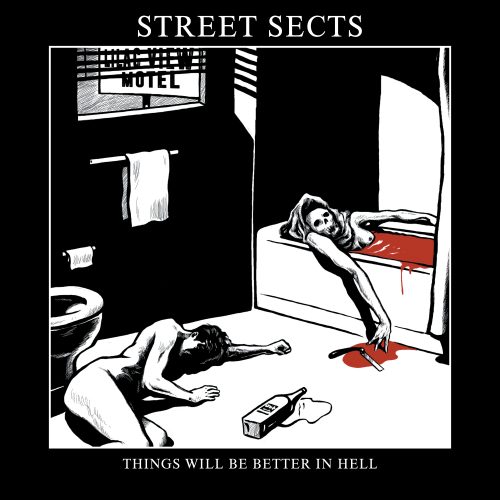 Things Will Be Better in Hell

Supported by Pitchfork, Vice, Rolling Stone, Bandcamp, and The Needle Drop, and recently having completed a North American tour with Dalek, Street Sects has recorded two new tracks, one of which is built on disassembled parts of a Controlled Bleeding song. This new 7″ is pressed on clear vinyl and is exclusive to Toronto-based Artoffact Records.

Side B, Bite Down Hard, takes a look at a “successful” relationship. In love, the word “forever” means until the end of life. But what happens if you make it? If you manage to stay loyal to one person, one idea, one position until your final days, how does that feel? Do you look back upon your life with a sense of pride and accomplishment, or do you lament the missed opportunities, and wonder how things might have been? Built entirely from samples that were pulled from Controlled Bleeding’s “Return of the Quiet”, “Bite Down Hard” was originally intended to be included on Controlled Bleeding’s Carving Songs, a collection of remixes of songs from Larva Lumps and Baby Bumps, but as the song came together it became clear that the track was less of a “remix”, and more of a Street Sects original composition, therefore warranting a separate release.

The 7” is pressed in two versions, one on clear vinyl and one on red.