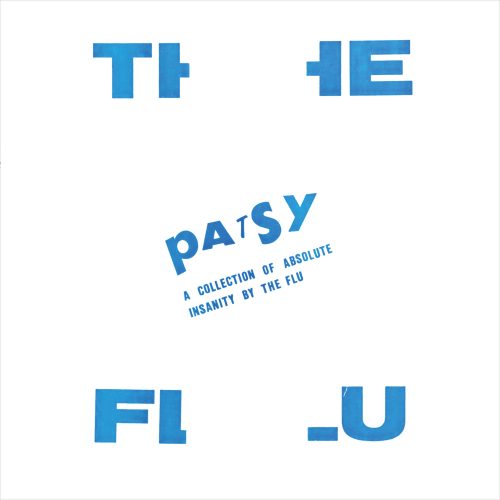 Patsy: A Collection Of Absolute Insanity

Between 1986 and 1989, cEvin Key (Skinny Puppy) and the late Alan Nelson (Hilt) spent countless hours recording out of Nelson’s third story apartment at 781 Queen Street in Toronto as The Flu. The music they produced in those sessions is quite remarkable, blending electronics, guitars, live drums, drum machines, live singing by cats, and recordings from tele-personals, all with Al’s inimitable lyrics and vocals.

At the time, The Flu’s recordings had been available only as self-distributed cassettes sold by Alan around Toronto – and Nettwerk, who was handling most all of Key’s other projects, wasn’t interested. But Alan found a start-up record label in Sweden called Osmium Records who were thrilled to release The Flu, and so Alan sent the masters and artwork for a cassette-only release off to Enskede, Sweden… and neither he nor cEvin ever heard or saw anything more about it. Osmium Records closed up shop in 1989.

In the mid 90’s, many poor quality bootleg copies of a cassette called “The Flu – Patsy” were being floated around European record shows, but nobody had ever seen or heard anything about an official release and one of the former owners of Osmium said that he couldn’t remember if it had actually been dubbed. However, in 2013, a couple of dedicated fans unearthed an actual, verifiably authentic, cassette-only release copy of Patsy: A Collection of Absolute Insanity by The Flu – proving that it had been released, and making that copy the only known to exist official copy of this album. This led one of those two crazy fans, who now owns the cassette copy, on a search almost as insane as the music itself: to try to locate the master tapes that Alan Nelson sent off to Osmium 25 years prior.

In 2014, amazingly, that fan found what he was looking for.

Artoffact Records is proud to offer a limited edition, double LP reissue of what is the absolute rarest cEvin Key-related album of all time, remastered for vinyl and using audio digitally transferred directly from the original masters.