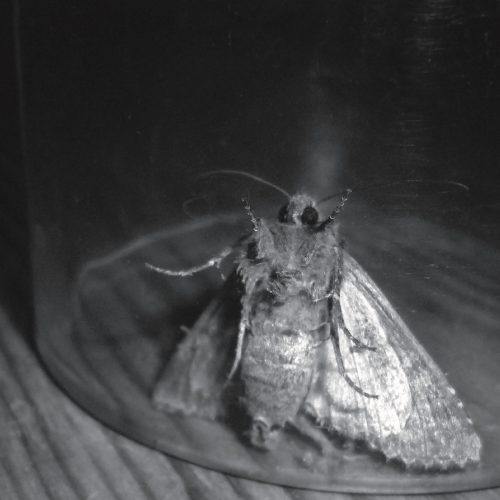 Psyche
Darrin Huss needs no introduction. He wrote Unveiling the Secret. His voice is recognized around the world, and Psyche has been a major influence from the early 80s to nearly everyone in electronic music, from Plastikman to Covenant to Sven Väth.

Luminance
A true visionary from the European synthpop revival movement, the Brussels-based Luminance already has several cassette releases on Wool-E Tapes, as well as an exquisite 7″ on the fantastic Weyrd Son label. The project has played out live in clubs, cafes, and record stores in Belgium, Germany, Poland, and Italy, and recently announced an upcoming release on Die Blinden Records.

The 7″
Flip it like a pancake but watch out for the moths. The two tracks on this limited 7″ vinyl are written and produced by Luminance, and Darrin Huss from Psyche provides lyric and vocal contributions. The result: two earworms by two very different synthpop producers engaging in today’s vision for the classic sounds of years past.

A Side: Left Out sounds like a new style hybrid between classic Belgian EBM and shiny dance floor Electro.

B Side: Passenger Seat plummets into the dark suspense of a night time carousel ride, with an Italo-Disco twist!