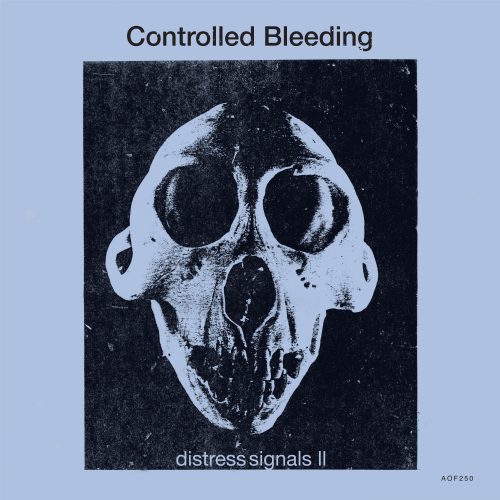 Released on Gary Mundy’s Broken Flag label in 1984, the first Controlled Bleeding album was Distress Signals, an almost impossible to find cassette-only album of brutal powernoise and experimentally distorted and tortured vocals. The near hour-long performance is immediate and harsh, and the tape has a kind of holy-grail quality amongst collectors, not least because of the special status of Broken Flag, but also because it has never been properly reissued on either CD or vinyl.

Part of the mystique of Distress Signals comes from Controlled Bleeding’s founder Paul Lemos, who, while putting together this reissue series in conjunction with Artoffact Records, insisted that there are actually two Distress Signals recordings, both very different from each other, and one which has never been heard or released in any form. In fact, according to Lemos, the second Distress Signals is the one which was originally intended for Broken Flag, but due to an error or oversight, a mistake in dubbing or who knows what, the audio on the Broken Flag tape is not the performance intended.

From this came the idea to release two editions of Distress Signals:

Distress Signals I – a completely remastered and restored edition of the original, rare Broken Flag tape.