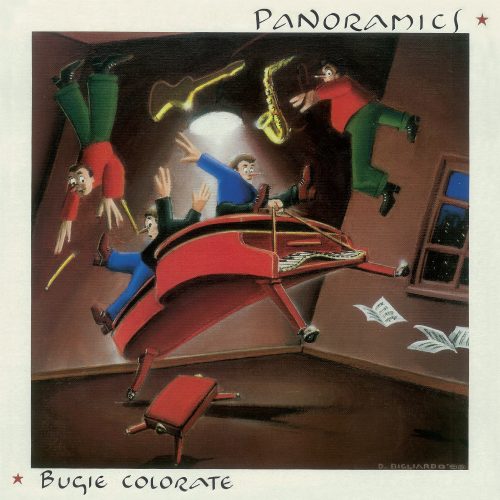 Formed in Naples in 1982, Panoramics was an avant-garde new wave band popular in Italy for their multimedia shows and for incorporating elements of minimalism and ambient music into their live sets.

Their mixture of pop music styles with experimental elements garnered them a steady fanbase in the early 80s, as well as many adherents in the art and theatre scene, particularly that of the so-called Vesu-Wave, a nod to the music, painting, and other scenes that flourished under Mount Vesuvius. Eventually the national press took notice of the fledgling band, with reviews popping up in Rockerilla, Frigidaire, Ciao 2001, and the manifesto. The band’s rise to fame continued when Italian radio, most notably RaiStereoNotte, began to play their music.

More collaborations on radio and stage took place in the mid 80s, and finally a debut record was recorded, produced by none other than Peter Gordon, hot off his collaborations with Laurie Anderson, David Byrne, Arto Lindsay, and Suzanne Vega. The record received excellent reviews in the Italian and wider European press, with Rockstar Magazine calling it “The flagship of the new Italian music … a miracle … a masterpiece.”

Panoramics ceased activities in 1991, after the one record. But they left an indelible mark on the Italian new wave and art scene, and their song “Estrellita” saw new life in the 90s in several versions as a remixed dance and house hit, receiving major play in the UK and United States. To celebrate this gem in European music, Toronto-based Artoffact Records presents a 30th anniversary reissue, completely remastered and restored and with two bonus tracks on the digital and CD editions.