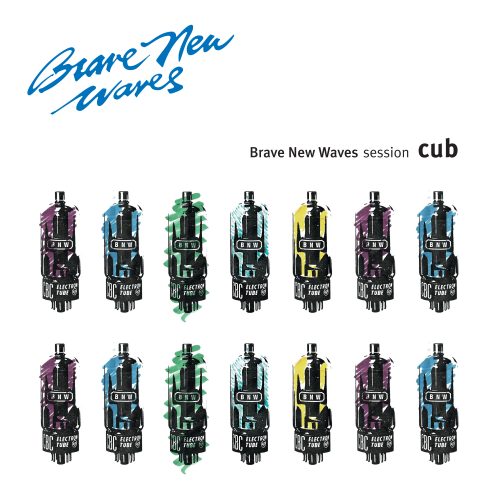 On this Brave New Waves session recorded almost to the day of cub’s 1-year anniversary, Vancouver’s all-girl ‘crush pop’ (or if you prefer, ‘cuddlecore’) squad deliver a stormin’ early ‘greatest hits live’ set in their inimitable and influential D.I.Y. style.

After a phenomenal debut record (on Mint Records) which saw these self-admitted amateurs reach the top 10 of Canada’s college radio charts, the trio of Robynn Iwata, Neko Case and Lisa Marr found themselves further capturing the hearts of music fans nationwide during their first cross-country tour. More pertinent to the issue at hand, whilst on that tour they also found themselves in the CBC’s Montreal studios laying down the sweet and sour slab of live ear candy you find in front of you — and boy, is it ever an easy treat to swallow!

This session perfectly captures the group’s early bubblegum-pop vibe, here honed sharp-but-friendly by the forces of ‘the road’. Guitarist Iwata and drummer Case’s back-up vocals are perfectly in sync as bassist Marr’s lead voice optimistically wraps playful children’s book tales around dreamy heartbreak-recovery overlays. Rhythmically primal but compositionally musical, cub reaches emotional complexity through deceptively simple methods. No instrument ever does more than necessary, and in fact, the musical sparseness only contributes positively to the overall direct, energetic joy that these recordings capture.

cub’s Brave New Waves Session was recorded on May 19th, 1993 and first broadcast in January the following year. The recording is taken from the original digital audiotape masters and remastered by Harris Newman at Grey Market Mastering in Montreal.