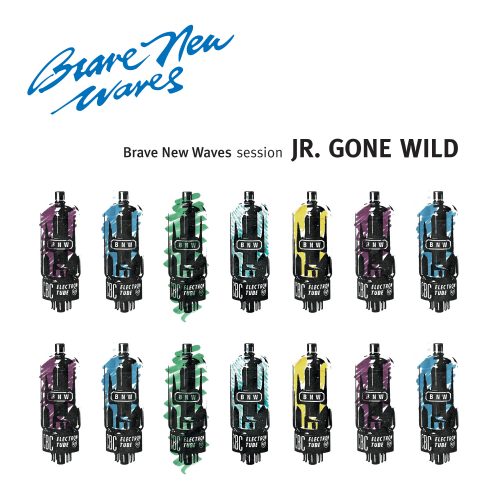 Jr. Gone Wild is an Edmonton, Alberta-based country and rock band formed in the early 80s by Mike McDonald, who over the years has been the band’s only constant member. Notable for their high-energy live performances, and a genre style that would end up getting dubbed ‘cow-punk,’ JGW recorded their debut album for cult punk label BYO Records in 1986, and since then have released five studio albums.

The band recorded their Brave New Waves sessions during a tour in 1988, and at the time, many of the songs were brand new (1989’s Folk You was not released yet). When McDonald heard the session 25 years later he exclaimed, “Some of those songs are so different now! … We were also playing too fast, and my flat vocals is evidence we had a lot of beer there.” But the session is excellent, particularly “Sight For Sore Eyes,” “I Don’t Know About All That,” and “Annie Get Your Gun.”

The Jr. Gone Wild Brave New Waves session was recorded on May 10th, 1988. The session was produced by Kevin Komoda and engineered by Denis LeClerc. The recording is taken from the original CBC Archives tape and remastered at Grey Market Mastering in Montreal, by Harris Newman.