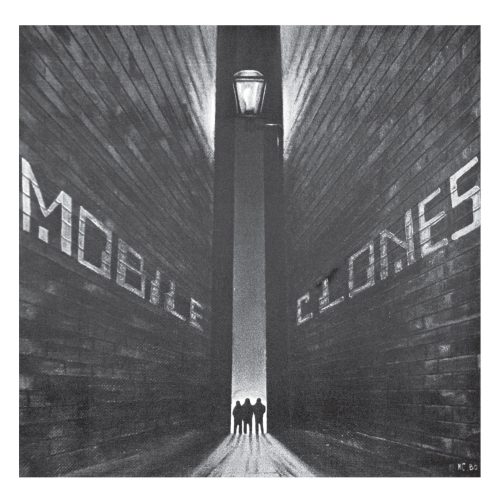 “It took guts to stand up in front of a D.O.A. crowd with a stack of synthesizers and no guitars.”

Indeed, in the Vancouver summer of 1978, with punk raging and synthesizer music being the domain of a few nerds, the future members of Mobile Clones saw their first D.O.A. show, which they later described as “fast, furious and funny as hell.”

But it was in that same year and just before the end of Mobile Clones that the group released a limited-to-200 units 7″ vinyl, which came in a paper sleeve and (for the most part anyway) was given or sold to friends. Nowadays, that same record fetches up to $200 in mint condition.

The Clones (as they call themselves) played a fast, punkish, in-your-face synth music, with snotty vocals and screechy synths. The lyrics were manifestly anti-establishment, and you get the sense listening to their music that they are at the edge of some kind of breakthrough–though of course they don’t know it yet. That breakthrough, arguably, is where at some point in the mid-80s, Vancouver became a mecca for synth music–with Images in Vogue gaining national attention, and the likes of Skinny Puppy, Front Line Assembly, and Numb reinventing industrial music.

But before all that, there was punk. The collectors’ websites that offer the original 7″ call Mobile Clones “synth-punk.” And that’s exactly what it was, in fact. Influenced by D.O.A. and The Subhumans and pre-dating what was to become Vancouver’s electronic scene, Mobile Clones stands today as a liminality that lasted but one or two summers, but which in its gutsy way expanded the possibities for one scene and opened up a space for another.

Artoffact Records is extremely proud to reissue an expanded and restored edition of the Mobile Clones EP, Abrasive Air. The EP has been upgraded to a 10″ vinyl, and two previously unheard tracks have been added. The artwork is restored and a special printed inner sleeve contains rare photographs, scans of gig posters, lyric scibbles, an old budget sheet and more! Also includes a wonderful Mobile Clones biography written by Greg Potter.