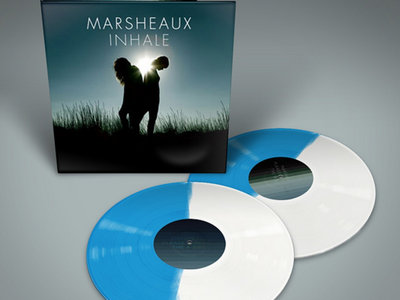 Blue-white half-half effect in a gatefold sleeve! We found a dozen copies in our recent warehouse inventory!
--

A reprint of Marsheaux's Inhale double-LP. This version has updated and corrected cover art, and the sleeve is upgraded to a beautiful gatefold. The vinyl is released on a special deluxe white/blue half-&-half. Limited to 299 copies worldwide.

"I do have a soft spot for Marsheaux," Andy McCluskey of OMD has been quoted as saying, and no doubt the Greek synthpop duo have garnered many accolades in their 10 year career. Marianthi Melitsi and Sophie Sarigiannidou have indeed taken Europe's synthpop scene by storm over four albums and high-profile remixes. The Human League played their track "What a Lovely Surprise" in the pre-show music for the Steel City tour; the duo were commissioned to do an official remix for OMD; and Tom Robinson and Stuart Maconie (BBC Radio 6 hosts) have praised their work.

2013 saw the release of Inhale, Marsheaux's most accomplished and successful record to date, and the duo's fourth full-length. With top marks from the likes of Vancouver's V-Rag Magazine and Collapse Board's Everett True, Inhale is a glorious synthpop record, one of 2013's best. Artoffact Records re-issues Inhale on double-vinyl with all-new cover art and three previously unreleased bonus tracks.


"I do have a soft spot for Marsheaux I have to say. They have a certain sort of wispy, melancholic charm."
-Andy McCluskey of OMD

"A fun, nostalgic romp through the evolution of electro pop."
-Mumbles, V-Rag Magazine

"This is a really lovely sweet song." (re: "To the End")
-Everett True, Collapse Board

"Marsheaux are all about pushing upwards and onwards and at their best their potential seems limitless."
-Alex Kennedy, I Die: You Die

"One of the year's best dance floor albums."
-Music Is Alright

"Marsheaux have perfected their slick and breezy synthpop formula since 2004 and Inhale is, in many ways, their most advanced effort to date."
-Niklas Forsberg, Release Magazine

"This is a great album."
-Nick Walters, It Scarcely Seems Possible blog

"Every last song on this terrific album is a keeper."
Softsynth blog